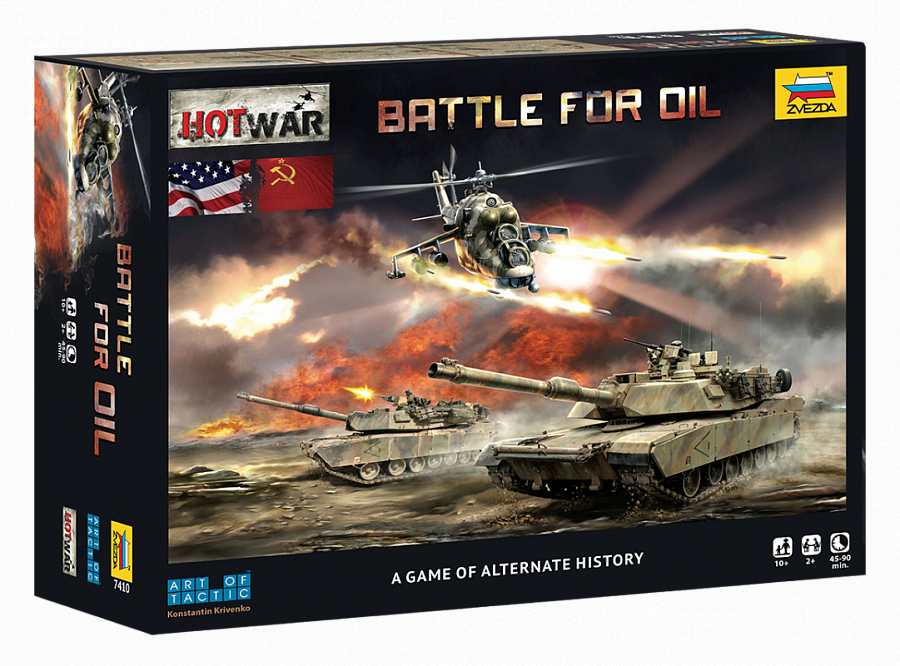 Vendor code: 7410
The year 1990, the planet Earth: The world is very much like our own recent past, but with no perestroika, no glasnost, no relaxation. American presidents continue to refer to the Soviet Union as the "evil empire", and the Cold War lingers on a thousand fronts throughout the world—from tiny tropical states to the headquarters of the intelligence agencies. Almost without warning, the next armed conflict erupts in the Arab East, at the center of the world's power depot. And this time, the fight is not only for how a small Persian Gulf country will live – as a socialist or capitalist state – but rather much more is at stake: control of the world's largest oil reserves!

Welcome to the world of The Hot War: Battle for Oil, a fascinating board game with miniatures based on Konstantin Krivenko's unique war gaming system Art of Tactic. This game puts you in command of modern troops and the powerful equipment of war in battles fought with state-of-the-art technology; it's also the first foray for the Art of Tactic system into a desert theater of operations, allowing players to explore any historical battle from the Africa campaign of Rommel to the Iraq War!

The Hot War: Battle for Oil starter set includes everything you need to create the first armed conflicts between the Soviet and American armies. Each side is represented by seven units: three motorized infantry platoons, two APCs, one tank, and one helicopter each. Motorized infantry units can be further customized and reinforced by machine guns, anti-tank missiles, and air defense systems. Before each battle, the commanders must choose where to position their reinforcements: Should you spread them out among your platoons, or attach everything together into one overstrengthed unit?

Like all Art of Tactic games, The Hot War: Battle for Oil uses specially-designed laminated cards for every unit. Each unique unit card displays all of the information a commander needs to use it in the field. The laminated coating allows players to write their orders directly on the unit card, easily cleaning them again before the next round. Players don't take turns, but instead simultaneously plot secret orders to their forces, then resolve them at the same time!
Viewed Items